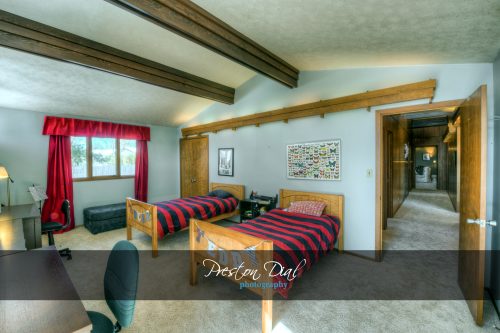 The final frontier. These are the voyages…  OK, not that kind of space! Photographing real estate can present many challenges, two of the most difficult being how to get a good shot in both very limited space, and how to create interest in an area that has ‘too much’ open space.  The photo above is a good example of the latter, which we overcame by getting just the right angle. This allowed us to use the dividing wall as a ‘block’ between open areas, while also a nice color contrast with the foreground objects, and enhancing the perspective of the room behind.

In this next photo, most amateur photographers would probably stand in the doorway to take the shot, with the result being the appearance of a small room filled with two beds and two desks.  By reversing the angle, and opening the door to include the entire length of the hallway, we create a much nicer atmosphere — not necessarily the illusion of space, but we remove the feeling of being cramped or stifled.