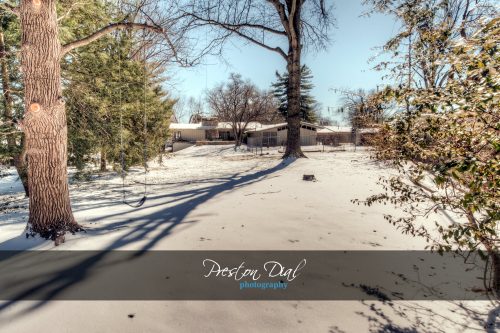 Every student of photography learns early on how important framing your subject can be to a successful photo, and the same holds true with real estate.  Oftentimes, it is just a matter of finding the right distance from your subject, in this case a smaller room with quite a bit ‘going on’ within.  Shooting the photo from outside the doorway, and including the room’s doors in the shot, creates a very nice welcoming feel.

Framing can be especially important when there are a lack of, or an overabundance of items in the shot, which often happens in outdoor home photos. In this case, because we were shooting in winter, this could have been a fairly bland photo of a white house with a white snow-covered yard.  Pulling the shot back to include more of the grounds gives us a nicely framed, balanced, and more colorful shot, while also adding in some nice shadow contrast on the snowy ground.